I am a SAM who lives in front of the World Heritage Site. This time, we will introduce 10 spots of Peace Memorial Park that you should see when you go to Hiroshima. There are many people who have been on school trips. However, there are over 60 monuments and facilities in addition to the atomic bomb dome in the Peace Memorial Park no matter how many times you go. I would like to guide you by carefully selecting the spots that you should look at from among them.

I hope this blog will serve as a reference, and I hope that it will be an opportunity to think about war and peace.

Q. How do I get to Peace Park? Q. What is the standard time for the tour?  1 Atomic bomb dome 2 Aioi Bridge 3 Bell of peace 4 Children of the Atomic Bomb 5 Atomic bomb support tower 6 Korean Atomic Bomb Victims Memorial 7 atomic bomb death and death monument 8 Aogiri Oogiri 9 Hiroshima Peace Memorial Museum 10 The Gate of Peace Q. How do I get to Peace Park? A. From the south exit of the Hiroshima Station for about 15 minutes by going to the Hiroshima Electric Railway Line 2 for Miyajima or going to the 6th Line for the Ega, get off at the Atomic Bomb Dome Front Station (Denig: Station where trains used frequently by Hiroshima citizens stop) The atomic bomb dome appears in front of you. From there, go south for about 7 minutes and you will find the Peace Memorial Museum. We have numbered the must-see spots for Peace Memorial Park on the map below. Please visit at least these 10 spots and enjoy the Peace Memorial Park.

Q. The way to go to Heiwakoen? 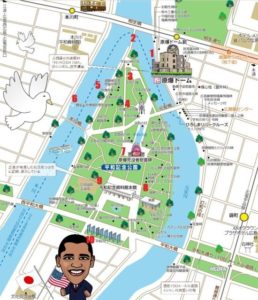 Q. The rule of thumb of time of the tour?

A. Peace Memorial Museum of No.9 depends on person for about 1 hour by a spot except for the above No.9 in the Peace Memorial Park, too, but when having that for 1 hour at the least, you can go around. But you'll also include the wish could you see carefully and need total of 3 hours as about 2 hours.

A symbol of Hiroshima who included a prayer of world peace. A citizen worked in order to complain of world peace, and registration of the world's cultural and natural heritage was achieved in 1996. Please feel misery and peaceful nobility of the war which has occurred at this place surely. 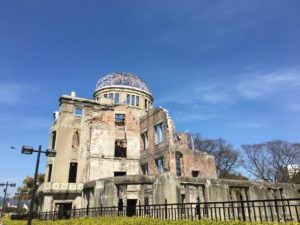 The atom bomb is explosive right above this Hiroshima Peace Memorial mostly, a blast, mostly, right above, it's said that the part of the building was left miraculously because it was received.

That it was a trigger of preservation? The article which is so is this. The light is lit in the evening and it's different from the daytime and strange and I can't help be afraid.

This, when I go to see after I know actually, isn't how to feel also different? 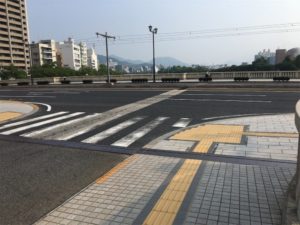 When a river is crossed from Hiroshima Peace Memorial, a bridge is seen, that this T letter spot across which a road (Aioi street) empty bridge is built was made the target point that an atom bomb of U.S. forces is dropped. A monument in a blast center is built in the site in Mr. Shimauchi medical clinic where it's in the location of the southeast more than Hiroshima Peace Memorial, so actual condition would like to ask you also to drop in at this place by all means. 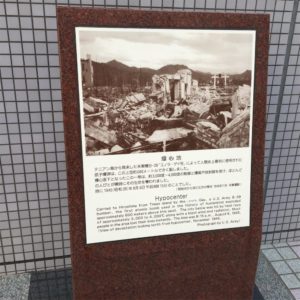 Nuclear weapon and the peaceful bell which was made as a symbol aiming at the world which has no wars. Everyone can arrive. I'll include peaceful expectation and strike a bell. By the way, it's also chosen as the Japanese sound hundred pieces for which the Environment Agency in those days would like to leave it in 1996. When I go early in the morning, an entrance is blocked up by color corn and it isn't put in the inside. Perhaps I think sound is because it becomes troublesome. 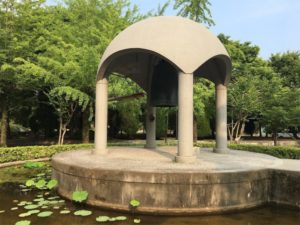 That this bell will be seen patiently, what and, a world map... The world map which has no borders includes the wish which is "of the world, one", and is carved. 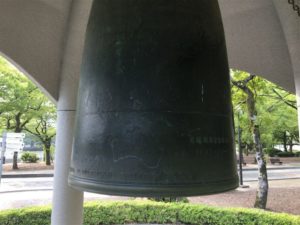 4 Child's image of an atom bomb.

Monument for the children who became sacrifice of an atom bomb including Mr. Yoshiko Sasaki who developed leukaemia by bombing and died of only 12 years old. That that was a motif and was made because Yoshiko kept wishing a sick recovery and folding a paper crane.

The bronze statue I have offers a folded paper crane to the top of the image, and rises. 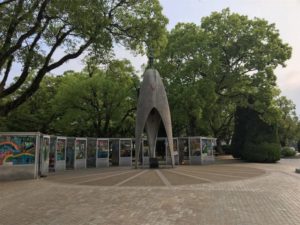 Many corpses were put to cremation at this part near a blast center. Background obscurity and family extinction are taken charge of including found remains by the building site when reviving, and remains of the atom bomb dead who don't have a hand are put in. 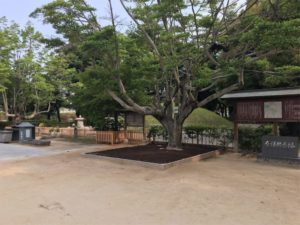 The found location and number are recorded on the guideboard which is behind the monument to the upper picture right so that the family of the deceased can look for remains. 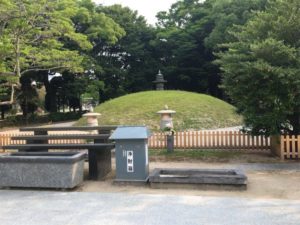 A victim of an atom bomb isn't only Japanese. Tens of thousands of Korean Peninsula former students were sacrifice the person rallied by forced labor and the person who was working for a life. A name of more than 2000 people's of dead is put in OKO.

The cenotaph which followed the historical events to which I say "The dead's soul got on the back of the turtle and died." 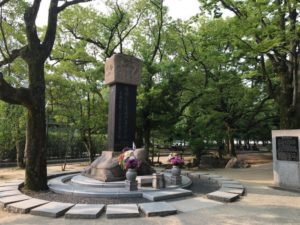 7 Atom bomb cenotaph of the dead.

Hiroshima by whom an atomic bomb at the beginning of the world has been dropped. I wish that annihilated Hiroshima-shi is reconstructed as a peaceful city and am built, and it's a cenotaph. A part on a roof was the house type of the clay figure from the feeling that Mr. Tokyo professor (those days) Kenzo Akashita would like design and defend A-bomb victim's soul against rain and dew. The inscription to which I say "Please sleep peacefully, because a fault isn't repeated." is carved in a monument.

In a central stone hut, domestic and abroad, in spite of, the atom bomb register of the dead in which the name of the atomic bomb victim who passed away was registered, payment, Tei trout. It's the famous place where an American OBAMA former president offered a flower, too, isn't it? When I leave for this place, the feeling which can be called nothing is excited.

And a monument as peaceful light is between Hiroshima Peace Memorial and this cenotaph. I keep burning the light which wished nuclear weapon extinction and ignited on August 1, 1964 until a nuclear weapon disappears from the world. A pedestal shows the shape that a palm was opened for the sky, and a peaceful lamp and a great figure are kicked. 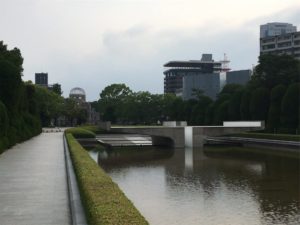 I find out that it has been left in alignment with Hiroshima Peace Memorial, a peaceful lamp and this cenotaph at Peace Memorial Museum right behind the atom bomb cenotaph of the dead.

8 The Chinese parasol tree from which I suffered.

The trace where you could suffer from 1.3 kilos from a blast center, be transplanted and bake a trunk in a blast center is also left now. I budded in spring of the bombing next year and gave the hope through which I live to the people who were in the collapse state. 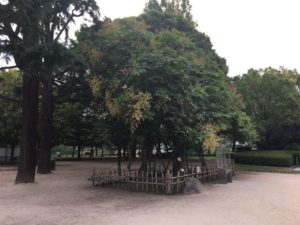 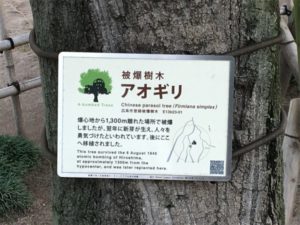 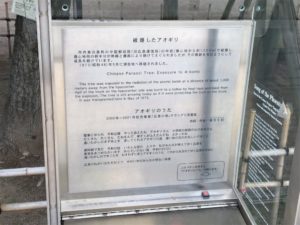 When the explanation edition has a button, and that's pushed, UTA of a Chinese parasol tree flows. One DATA is all light smiling face of all over the world for Hiroshima's wish.

The obvious reference library where the material which indicates a terrible sight of a momento of a survivor of the atomic bombing and an atom bomb is exhibited. It's shocking and a medium also has the material I feel like turning my eyes away from which, but I'll engrave in my memory that there was that actually. And I'll feel the fear of the nuclear weapon and the weight of the life! 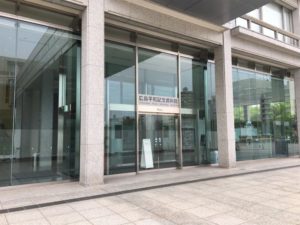 9 meters of baku height, 2.6 meters of width and 10 glass phylums of 1.6 meters of depth compare with a pillar in Peace Memorial Museum and parallel over 75 meters. The character of "peace" is cut by a language of 49 worlds in a pavement of a gate and the footing. 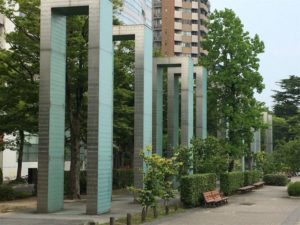 Produced one was French artistical Clara, Mr. Al tail, architect Jan = Michele and Mr. VIRUMOTTO, produced 60th anniversary of bombing in a chance and contributed to a city. "Peaceful gates" are the memorization and the request held to the future beyond history, it's being expressed and. When coming to Hiroshima, please also see this gate by all means. I cross a main street in Heiwakoen, so it becomes a little far from the station, but it's photogenic, so the form depends on the seen angle, and I think a good picture can be taken. I'll know a war this time and think about Heiwa! Hiroshima-ken I introduced 10 spots of must-see in Peace Memorial Park. There are also various monuments which make the sense in each besides this, and I think it isn't possible to judge everything by the once. Could you know famous name-lessness by all means unrelatedly for spot 10 I introduced, it's a place, so when referring, I'm very happy.